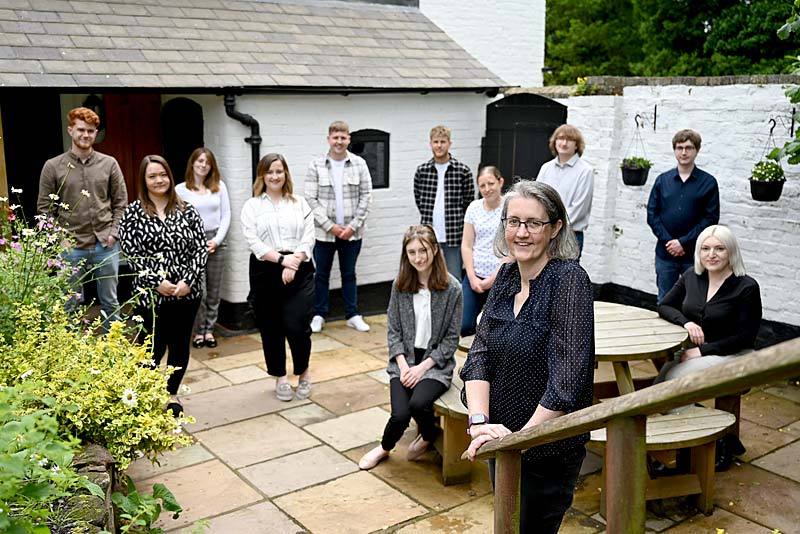 An award-winning Shropshire digital marketing agency has moved into new offices in a building steeped in history - believed to date back to medieval times!

Ascendancy Internet Marketing made the move from Shifnal to 5 Chetwynd End in Newport in September last year, having purchased the property in 2019.

The company was launched in 2004 and helps firms of all sizes strengthen their business through digital marketing and improved web design. The team specialises in providing, updating and improving websites, helping businesses become more efficient and profitable.

Helen Culshaw, Ascendancy’s Managing Director, was interested in the history of the firm’s new offices and set about finding out more. There remain some gaps to be filled but she is confident of adding more detail as research continues.

“We believe there was a building, or range of buildings, at 3/5 Chetwynd End dating back to medieval times,” she said. “The oldest part of the buildings, the frontage onto Chetwynd End, was measured by Newport History Society and found to be the right width to be a burgage plot.

“A burgage plot was the property owned by a burgess in a medieval town and consists of a long narrow plot with a row of outbuildings stretching out to the rear of a shop or house. Burgesses congregated around main streets and the marketplace.

“The History Society also dug some test pits in the garden of Number 5 during the summer of last year and found some pieces of medieval pot among many more modern finds. Within the property is a cruck frame which has been partly exposed by the previous owner and you can see how the building would have been a single storey structure, with the height having been extended upwards at a later date.

“Nothing is known as yet of the building between medieval times and 1835, when the building, along with Number 3, appears on the 1835 Tithe Map in the ownership of Thomas Boultbee, who lived in and rebuilt Chetwynd House next door on the site of a previous farmhouse. By 1835 the building was the same shape as it is today, so the later additions must have occurred before then.”

Helen said some time before 1862, the property came under the ownership of John Sarjeant, a local solicitor who also owned and lived in Number 3 next door until his death in 1906.

“That year, the pair of properties were sold at auction - Number 5 was at the time in the occupation of John Tomlinson,” Helen added.

“They were purchased by the Elliott family who lived in Chetwynd House next door, the house built by Thomas Boultbee. HGU Elliott was another solicitor, and he rented out Number 5 to his clerk William Henry Pugh and family, until both Pughs died in 1947.

“A family by the name of Greenaway lived in the property next, in the 1950s and 60s; maybe it was one of their children that was responsible for the initials ‘JG’ inscribed in the back wall?

“In 1960 the property was described as being in quite a poor state of repair and by 1962 a bathroom had been installed and a number of other improvements made. By 1981, however, the building had deteriorated again and needed a thorough overhaul.

“A major renovation and modernisation of the property took place, this being part funded by a grant from the local council. We bought the property in 2019 from the family that had owned it since 1906, and once again it needed a thorough overhaul.

We embarked on a project to renovate the house before finally moving in last September.”