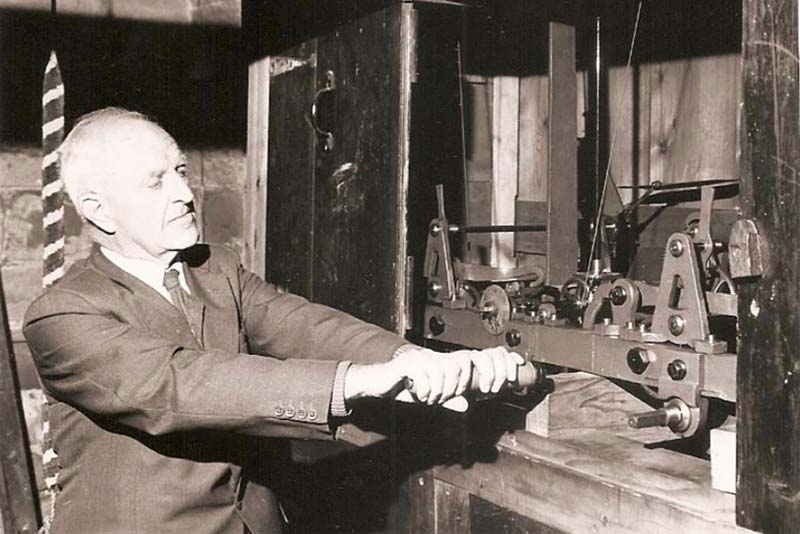 Born in the late 1700’s, John Norris (senior) lived and worked in the small hamlet of Weston Jones just North of Newport. He married Martha Morgan from Prees, (near Whitchurch) on 26 March 1818 and they raised five children; Thomas, Mary, Eliza, John and William.

An ambitious man, in 1828 its written that John Norris of Weston Jones (a watchmaker) together with George Ward of Newport (a victualler) were conveyed a tailors burgage in St Mary’s Street, Newport. The property came with conditions however; A lifetime tenancy bequeathed to Richard and Elizabeth Parker (daughter of John & Ann Small) provided that the Parkers during their lives “provide the Smalls with good meat and drink and sufficient comfortable and convenient lodging in the house, with good warm comfortable and substantial clothing and linen, with washing and other necessaries suitable and fitting for their age and rank in life”. *Shropshire Archives

Wife Martha too was not without business acumen being separately listed from John as a farmer in Whites History, Gazetteer & Directory of 1834. But circumstances changed and by the next census of 1841, Martha was as a widow. Eldest son Thomas took on the farm and, like his father, was both farmer and clockmaker by trade.
Losing a breadwinner would often mean hardship for a rural family, farms and cottages often tenanted. But Martha was left comfortable enough to give up the farm and move from Weston Jones to Church Aston. Living in Aston Terrace, with her daughter Eliza, she was a woman of means being listed as a ‘Proprietor of Houses’ at age 55.

Martha and Eliza lived together until 1860 when Martha passed away aged 64. William, the youngest of the family, moved in with Eliza after his mother’s death. He had been living in Whitchurch with his Aunt, completing an apprenticeship and qualifying as a ‘master watchmaker’. His sister however, quickly found love and married soon after, moving to Horseley Heath with her new husband Freeman Morriss. William was not alone for long and married Ellen Bradbury in 1864, settling in Newport, raising four daughters and
operating his horology business from Barkers Yard off High Street.

Meanwhile the second son, John, took a different path. He began work as a draper’s assistant for John Shinton, a grocers, tea and provision merchant in Wolverhampton training to be a Mercer. At the age of 28 he married Maria Justice Sillitoe of The Post Office, High Street, Newport. Maria had inherited the Post Office from her Postmaster father, adding her name to the Post Office Appointment book and becoming Postmistress at the young age of 21 in 1846.

John & Maria ran the Post Office in St Mary’s Street for a time in the 1860’s with Marias’s sister, Frances, living and working with them. They had returned to High Street by 1871 and Frances left to become the Postmistress at Market Drayton. By now John and Maria had six children; John Justice Norris (clergyman);

Back in Weston Jones, Thomas married Betsy Paddock from Flashbrook. It was 1845 and the corn laws were about to be a repealed putting strain on rural life. Thomas and Betsy had 12 children; five boys and seven girls and stayed in Weston Jones until the 1880’s when Thomas took leave from farming and moved to Woodlands House, Dog Bank (or Doody Town Woodlands), Church Aston to continue as a Clockmaker well into his 70’s before retiring.

Thomas Richard Ratcliffe Norris was born in 1863 in Weston Jones. In 1881 (aged 18) he was still living with his watchmaker family (now in Woodlands House) not moving out until he married Eliza Beech in 1891. They set up home in Avenue Road, Newport.

Kelly’s Trade Directory lists him as a Watchmaker and Jeweller operating from High Street, Newport at this time until eventually the family moved into High Street to live, after his uncle John (the Postmaster) died in 1888. Thomas RR then took up the additional role of sub- Postmaster. Whether this was through necessity or circumstance isn’t clear as Maria carried on with her Postmistress role into her 70’s. Thomas RR appears well respected, cleaning and repairing clocks for local land owner the 4th Duke of Sutherland. He died in 1923 at the age of 60 leaving Gordon Ratcliffe Henry Norris, Hilda Francis Norris and Iris Dorothy Norris. Gordon and Hilda had married and moved out in the couple of years prior to Thomas RR death and Iris married shortly after.

Gordon Ratcliffe Henry Norris 1892 - 1978 spent his youth in High Street, Newport. At the age of 18 he started his career as a clerk at an Ironworks. War broke out (WW1) and he was seconded to the RNVR putting his paperwork skills to good use ashore at Bristol, Clapham and HMS Wildfire.

Gordon married Margaret from Cumberland in 1921 and they raised two daughters Olive and Jean in Church Aston. After his father died, Gordon took over his duties cycling to St Nicholas Church and winding up the heavy weights to keep the mechanism ticking over that set the clock in motion for a week. He did this every Friday. He had a passion for pigeons, keeping a loft of tumblers and those 54 Church steps kept him extremely fit, easily beating everyone in the family to the top of The Wrekin at the age of 80 years. His daughter Olive is now in her 90’s and a great source of local history.

The ‘Ratcliffe’ name has been passed down through the Norris family as a middle name for generations, the first recorded instance being both Thomas and Johns sons. A given name is often traceable to previous family members, nee surnames or associates, but how Ratcliffe came to be so important to the family is a mystery. Gordon Ratcliffe Henry Norris had only surviving girls but both of his sisters, Hilda and Iris, continued the tradition, giving their sons the Ratcliffe name. My dad (at the age of 88) is currently the last Ratcliffe on the tree, however, having lost touch with more extended tree lines, it may well be that there are others.

Back to business for Newport hair studio