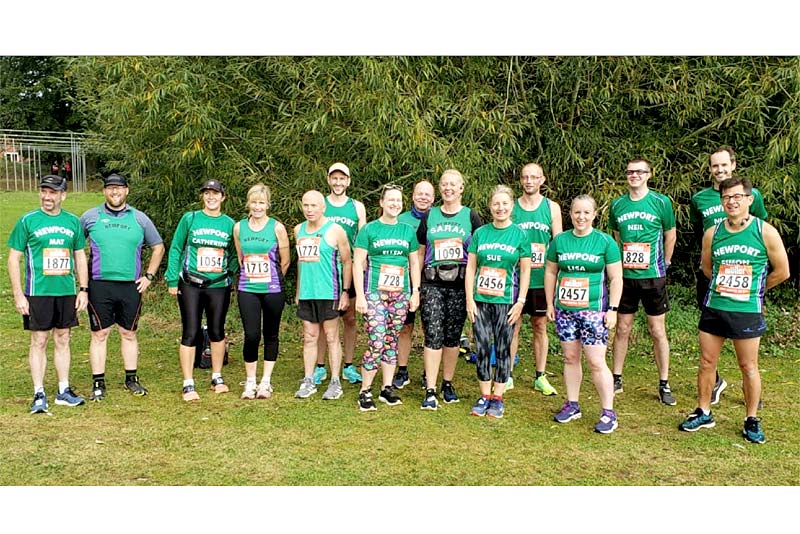 Last weekend, a number of Newport & District Running Club members made the short trip up the A41 to run in the Market Drayton 10k, a popular local road race which starts and finishes at The Grove school. The course winds its way anticlockwise around the town, with both the start and finish lines on the school playing fields. The runners were well supported all along the route by local people, and especially at the hill at the 9km point, where runners ascend into the town centre up Phoenix Bank.

Not a terrible time considering it includes...

- A lunch stop at the pub for pork pie and liquid refreshment.

- And having my Sunday Roast.

A very enjoyable way to approach a tough distance.”

In addition to this, before the Market Drayton 10k started, Ben’s daughter Martha Roper stormed to victory in the 5-6 year olds’ race to take the trophy for the first girl and second place overall. She was over the moon with her win.

Well done to the three Newport & District Running Club members who ran in this year’s London Marathon. Louise Patterson managed to achieve her goal of running quicker than 5 and a half hours, with her new Marathon PB of 5:26:55. She said afterwards: “Absolutely overwhelmed with all the support I’ve been given this weekend. I’m so proud of myself for achieving a sub 5:30 marathon. Had an absolute blast and the London Marathon was so much more than I ever expected it to be”.

Lindsay Browning ran a time of 3:49:52, saying afterwards:” I had a GREAT time. Well done to any other Newport runners and thank you to the Newport spectator I heard shout for me!”. Alex Watts similarly praised the day, saying it was “a day to remember; the crowds were awesome!” after finishing with a time of 4:50:07.