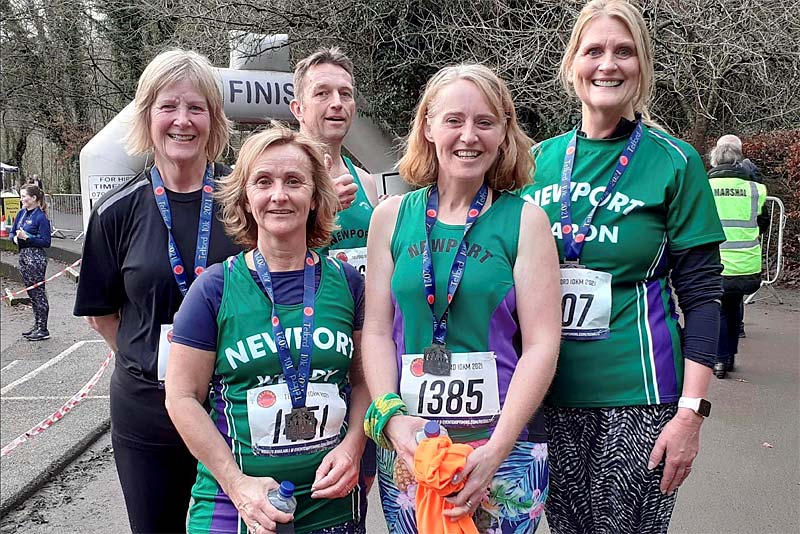 Last weekend saw the return of one of the most popular road races in the country, the Telford 10k. Featuring one of the fastest courses in the country, people come from all over to take on the 2-lap course, which takes place in Telford Town Park and on the Silkin Way, with a net-downhill elevation profile that is perfect for attacking those PBs.

Being a local race, this is one that is always well populated with Novaportan runners, and this year was no exception, with 16 members of Newport & District Running Club taking to the start line. First of them to reach the finish was Ashley Moore, who beat the 40-minute mark with his very rapid time of 39:53, which earned him 450th position in the race overall. Alex Cochrane was the next Newport runner to finish, breaking the timing beam at 44:04, which was enough for 598th place. Phil Dolding’s 45:19 bagged him 627th position, and just under a minute behind him was Nick Watts, who clocked 46:11 in 649th place.

Martin Murdoch finished 1,007th, just 2 places behind Sharon, with his time of 1:05:07, and Louise Patterson was close behind in 1,012th as she clocked 1:06:01 for an all-time personal best time. Jane Brookes had the highest category finish of any NDRC runner, as she was 7th in her category, running a time of 1:10:28 to finish .

We all have that race which we count as our “A” race: the one that you want to be in top form for, or have history with, and for me that came round on Sunday 12th December.

I’ve done this race twice before and finished second both times, once being beaten by a guy I coach, and the other time by a 7ft Elf! So this year was going to be my year! This year’s training was all about making sure I was in tip top form for December. Training had gone well on the run up to the race, but then I got a nasty case of “man” flu and as I’m sure you men know, this can be very dangerous, and has to be taken very seriously, even if my wife doesn’t seem to think so!

With the Saturday arriving before the big race on the Sunday, I wasn’t feeling in top form and knowing that competition was going to be fierce, I needed to think outside the box. And as every good Santa knows, he needs his Reindeer to pull him along. For me that comes in the form of a labradoodle named Vixen. So me & Vixie lined up on the start line for Love2Stay Santa dash, me dressed in the Santa suit & Vixie with her flashing collar matching harness.

The whistle is blown and off we go. Vixen starts quickly and pulls me along like she’s got presents to deliver to children on a certain good list. We work our way through the field and by the time we get to the first kilometre we are joint 1st with another runner pushing a buggy. Noting that he didn’t seem to be properly wearing his Santa hat, I was thinking of complaining to the organisers like a football complains to the referee over a penalty. But as it’s my brother, getting him and my niece disqualified might make a bit of an atmosphere for Christmas lunch this year so decided against it!

After a bit of confusion over the route, we started to pull a lead on my brother & niece, and took the finish line in 18.33. Not our quickest time, as myself and Vixie did Western Park 5k in under 18min, but that wasn’t in a Santa suit!