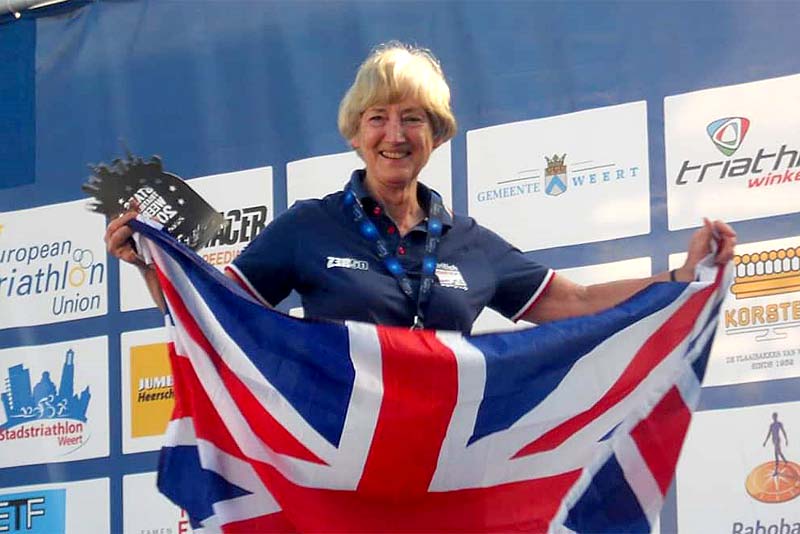 This Saturday, there was international success for Newport’s Hilary Stevenson, as she took the silver medal in her age group at the European Triathlon Championships at Weert, in the Netherlands. The Championship races take place over the standard olympic-distance triathlon: 1,500m swim, 40km bike and 10km run, and Hilary completed the course in 3 hours, 45 minutes 21 seconds, just under 20 minutes behind overall category winner Elisabeth Onißeit of Germany, and took the silver medal in the F75-79 age category.

This is a huge achievement, to rank second in Europe, and is the culmination of 12 months in which Hilary has particularly focused on the running aspect of her training. Hilary has been running with Newport & District Running Club for the past year, having only joined 12 months ago, and credits the club’s Tuesday night Cosford speed sessions and coach Ian Kevan for her recent improvement in the running aspect of her Triathlons.

Last Monday, a number of Newport & District Running Club members took advantage of the bank holiday to take part in a few races. A number of members took to the streets of London, for the Vitality London 10,000, which also doubled up as the British 10k national championship (which was won by Mo Farah). The course for this race wound its way around the centre of London, starting on the Mall, and taking in sights such as St. Paul’s Cathedral, Trafalgar Square, Whitehall and Westminster, before finishing in front of Buckingham Palace. The route was well-lined with supporters, and the sun was out, making for a fantastic day with a great atmosphere. The first Novaportan runner home was Neil Fairbrother, who set himself a new 10k PB of 44:01, taking 2,224th position, out of over 19,000 runners. Gary Mountford wasn’t too far behind, running a course PB of 45:25 in 2,700th place. Steve Cannon beat the hour mark, and was in the top 10,000 runners, with his time of 58:13 in 9,842nd place, whilst Elizabeth Mountford was 16,161st in a course PB time of 1:10:46.

The Bridgnorth Lions held the inaugural Bridgnorth Marathon on bank holiday Monday alongside their annual charity walk. The route was very hilly, with runners heading out to Ditton Priors before ascending Brown Clee to reach the highest point in Shropshire. Runners then made their way off the hill along an undulating route back to Bridgnorth town hall and the finish line. As it was the first year of this race, the field was fairly small, with only 28 runners finishing the marathon. Newport & District Running Club had two runners taking part: Phil Link completed the course in 5 hours and 32 seconds, with Ellen Deighton just 3 places behind him with a time of 5:12:06. Both were pleased to have completed such a challenging course.

Also taking advantage of the bank holiday sun were Tom and Emily Pope, who travelled to Devon to take place in the annual Bampton to Tiverton road race, a 7 mile, 125-yard linear race organised by Tiverton Harriers, which has taken place almost every year since 1946. The scenic, undulating course follows country roads, and takes in views of the Exe valley before passing the front lodge of Knightshayes Court, and finishing in People’s Park, Tiverton. 187 runners took to the start, and Tom was the first of the pair back, covering the course in 46:29 and finishing in 31st position. Emily finished exactly 10 minutes later, coming in at 56:29, and taking 91st place overall.

Last Wednesday, NDRC’s Jonathan Pierce took on one of the fiercest challenges in world marathon running: the Everest Base Camp Marathon. This annual high-altitude event celebrates the historical ascent on 29th May 1953 of Mt. Everest by Tenzing Norgay and Sir Edmund Hillary, and crisscrosses the high sherpa trails of Khumbu valley. 176 runners took part in the full marathon distance event, and Jonathan finished in 77th place, in a time of 8:23:32, which is very impressive, especially considering the gruelling conditions

On Sunday, Robin Guy took on the gruelling challenge that is the UK Ultimate Triathlon, a Half Iron Man event, which comprised a 1.2 mile swim, 56 mile bike, and a half marathon to finish. The event was based at Alderford Lake, near Whitchurch, with the cycling section taking in the countryside to the west of the town. Robin finished the course in a very quick 4 hours, 56 minutes 27 seconds.