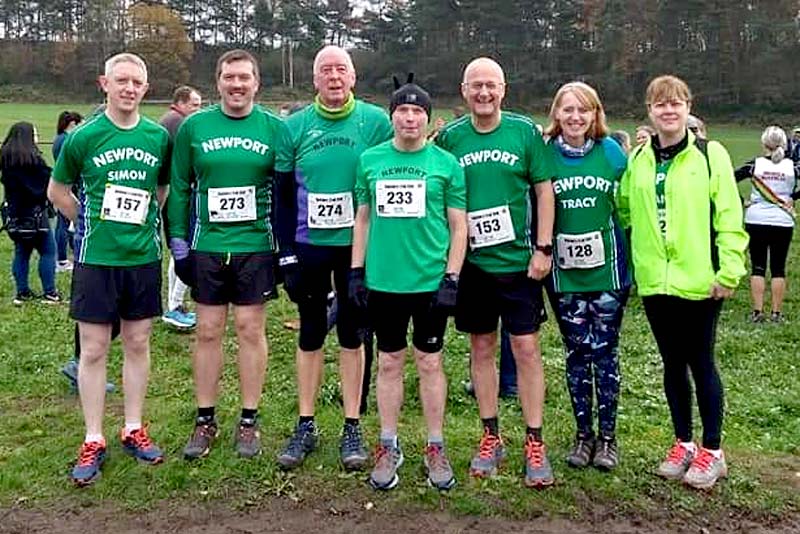 Newport Runners on the Beckbury Trail

On Sunday, nine Newport & District Running Club members made up part of a field of 175 Runners at the Beckbury Trail, a 5.6 mile trail race which takes in tracks and trails around the villages of Badger and Beckbury, in south-east Shropshire.

Jennie Waters reported after the race: “I absolutely loved Beckbury. It was my first trail race last year (and my first race after joining NDRC) and very different conditions. Last year it was sunny and dry underfoot, this year there was plenty of mud and no sun. But I loved it again and was the best part of 3 minutes quicker than I was last year.”

A field of 429 runners lined up for the start of the Mad Jack’s 5 race last Saturday, knowing that they had a very tough, wet 5 miles ahead of them. The race is set entirely within the grounds of Attingham Park near Shrewsbury, and not only incorporates tracks and trails, but also leads the runners through “Mad Jack’s Pond”, a 50cm-deep pond which runners must wade through just before the finish line. The weather this year was very cold and wet for the race, and getting a dose of icy cold water in the pouring rain made for an especially tough finish to the race this year.

Ben Roper and Ellen Deighton did an ultramarathon with a difference when they took part in Escape From Meriden this weekend. The event started in Meriden, Warwickshire, the geographic centre of England, at midnight on Friday night. Once participants are released, dressed appropriately in orange jumpsuits, they have 24 hours to get as far away from Meriden as the crow flies as possible, choosing their own route. Medals are awarded if participants make it over a certain distance away.

Ben and Ellen chose to run home towards Newport (almost 50 miles away), knowing this wouldn’t take the full 24 hours but would get them a medal if they made it. With the event starting at midnight, and both of them working on Friday before going to the run, sleep deprivation was a real challenge, as well as there being no checkpoints or aid stations, so runners had to be completely self-supported. The recent flooding across the country also made for tough conditions underfoot.

Both runners made it over the first event boundary of 30 miles as the crow flies (running further in actual miles), earning them the silver medal for the event.

On Sunday, NDRC’s Louise Patterson took on the Conwy Half Marathon, a scenic race which starts and finishes at Conwy Castle, and winds its way up the coast to Llandudno, before doing a lap of the hilly Great Orme headland and heading back down the coast back to the starting point. Louise was happy with her time of 2:45:30, and is now looking forward to a break before commencing marathon training.