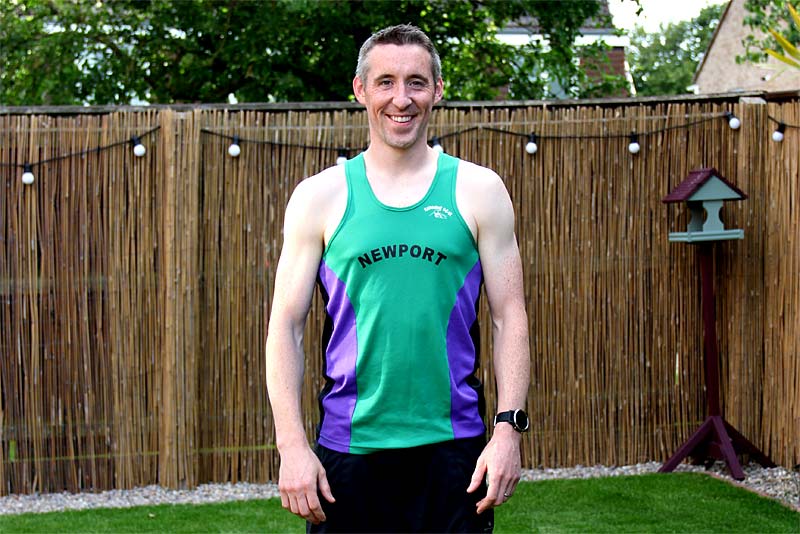 The West Highland Way Race is one of the World’s longest established ultra-marathons, first taking place in 1985 on the long-distance trail between Milngavie (just north of Glasgow) and Fort William in the Scottish Highlands. The race is 95 miles long and climbs 14,000 feet along the way.

Sadly, this World renowned race, due to take place on Saturday 19th June, couldn’t take place this year due to the Coronavirus pandemic, so race director Ian Beattie and his team created the Virtual West Highland Way Race (Virtual WHW race), to bring together the ultra-running community in a different kind of challenge.

The Virtual WHW race started at midnight on the 11th June; and runners had 9.5 days to complete their own socially distanced 95 miles. The race attracted over 1,700 runners from all over the world in the solo race, relay race and as teams of three. Taking part in the solo race and representing Newport & District Running Club, was our very own Patrick Bonner, 39, of Newport. Having made a return to regular running earlier this year; and with one ultra-marathon under his belt, Patrick was keen to take on this multi-day challenge and give it his best shot!

I had my race gear ready to set out at midnight on the 11th of June. I took one look at the torrential rain and went back to sleep and eventually started running at 4am on 12th June when the rain had eased. My plan all along was to see if I could run the full 95 miles at a pace of around 7 minutes per mile. However, just before leaving the house on day 1, I saw some of the quicker times being posted, so I decided to run the first leg as fast as I could, to try and stay close to the front runners. It was a strategy that nearly ended my race early, as I had never run that far at such a pace before. The knee pain I had was not good, but I kept a fast pace for the full 36 miles of leg 1 and tried where possible to find as many hills to run up and down, so I could try and match the elevation of the real West Highland Way. I finished the 36 miles of leg 1 in a time of 4 hours 15 minutes, which unexpectedly put me in 15th place overall. Spurred on by being near the top of the leader board, I was keen to start leg 2.

I started leg 2 with a rest day to recover my knee. Lots of ice was applied because I knew if the pain persisted, that this was going to be a brutal last 59 miles. Luckily the pain had subsided enough to get going again on Wednesday 17th of June, so with only 2 days to run 27 miles as fast as I could, I set off at 4am again. As I ran that morning, it felt as if my body was repairing itself as I ran. It was a very misty morning, but as I ran, I felt immersed in nature; no car noise, just birdsong, a beautiful sunrise, the sound of the trees around me and my footsteps. I just felt very happy, so happy in fact that I didn’t even notice the 18 miles running go by that morning. I hadn’t hugely pushed my pace that day, doing an average of 7mins 43 seconds per mile, but what I lost in time, I made up for with the pure delight that comes with running with a smile on your face! The next day, I decided that I was going to step things up a gear, so I churned out the next 11 miles at 6mins 49 seconds pace. I remember is was raining so hard at one point that I could just open my mouth to rehydrate, which was a wee tasty bonus! 😊 I finished the 27 miles of leg 2 in 3 hours 19 minutes, which left me in 19th place.

With only 2.5 days to run the last 32 miles, I decided to take a day’s holiday on the Friday and run twice in one day. First up was a 13 miler which was hard going in what felt like a very hot and humid afternoon. I wanted to climb the leader board, so that kept me going at a fast pace; I could also visualise catching people, so I wanted to run every second as fast as I could. My final run of 4.5 miles that day was at sunset around Newport and Edgmond. I got some very strange looks as I ran through town, perhaps if I had a beard and a cap, the people of Newport would have mistaken me for Forest Gump! Saturday was the same 2 run approach, with a late morning start to run 9 miles at under 7-minute mile pace. It was so nice to see some runners out from Newport and District Running Club that morning; they were out doing their regular Saturday socially distanced run; and their cheers and words of encouragement really gave me energy! 😊 I finished Saturday with another 4-mile run, but this time, getting close to 6-minute miles. So the final day had come and I had just 1.5 miles to go. I ran flat out and had nothing left by the end as I was very close to 5-minute mile pace. I wondered if that was enough to climb the leader board and it was. As the results came in my time of 11 hours, 19 minutes and 54 seconds was good enough to see me finishing in 18th place overall.

The race was both exhausting and exhilarating! A real challenge which saw me go through a total range of emotions, from utter despair at the thought of possibly having to pull out of the race due to injury, to feeling like I was flying through the Shropshire Trails totally carefree and enjoying nature!

Parallel to the race, there was lots of great social media posts and camaraderie from all of the other competitors. The Scottish Ultra-Marathon circuit is like no other; it brings a special group of people together who love trail running and so, I enjoyed lots of banter with fellow racers as we each did our own solo efforts in different parts of the country. All of us alone, but feeling part of something special, a community… a family of runners all enjoying the elements together!

I was also extremely pleased to see that another one of Newport and District Running Club’s members, Keith Robins, who has run the real West Highland Way Race several times, was also running in the race. Keith had a great run and finished 9th in his Male Veterans category, which is great running indeed.

So for the next challenge….. I think it has to be the West Highland Way Race all in one go! (If I am lucky enough to get entry!)