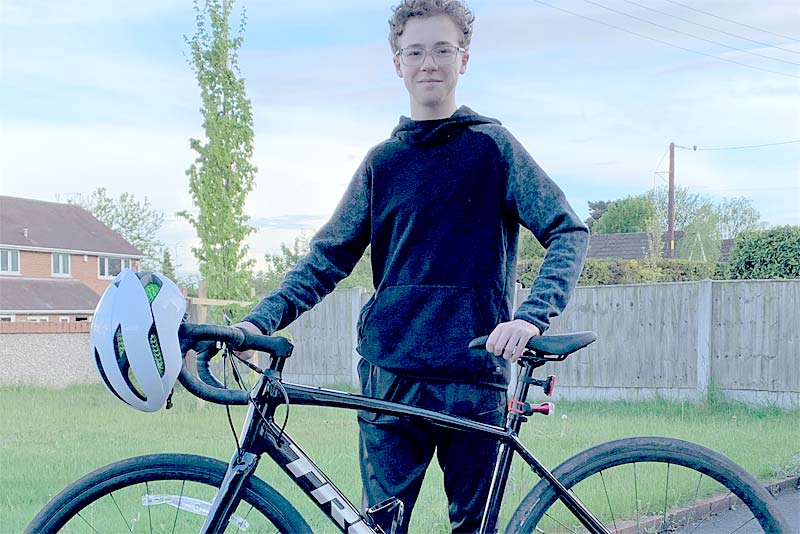 A Newport youngster saddled up for an epic bike ride to raise hundreds of pounds for victims of climate disasters around the globe.

Fourteen-year-old triathlete Callum Thompson signed up to a sponsored cycle challenge aimed at helping create a brighter future for those affected by heatwaves, storms or floods. The Stafford Grammar pupil was determined to clock-up around 20 kilometres a day and set himself an overall target of 500km within one month.

His effort was part of the British Red Cross ‘ride for tomorrow’ initiative encouraging riders to tackle a distance of 410 kilometres, which represents 410,000 people estimated to have lost their lives over the past decade through natural catastrophes.

Callum’s daily routine involved either a circular route from him home in Newport or a workout on a static turbo trainer.

“I really wanted to do something which would help people around the world and at the same time would also help me improve my performance in triathlon. My uncle challenged me to extend my target to 500 kilometres, which left me a very tough last day as my legs were tired and I still had to do 42k to get there.

“The money I raised will go towards helping to provide shelter, food and water for those in need throughout the world. Unfortunately another tsunami, cyclone, drought or flood will surely happen,” said Callum.

In completing the task, the SGS student - who trains with Newport Swimming Club and is a member of Telford Triathlon Club - raised £635 for the charity.

Edgmond is raising the community spirit!

Join the Spot the Oddity Competition in Newport