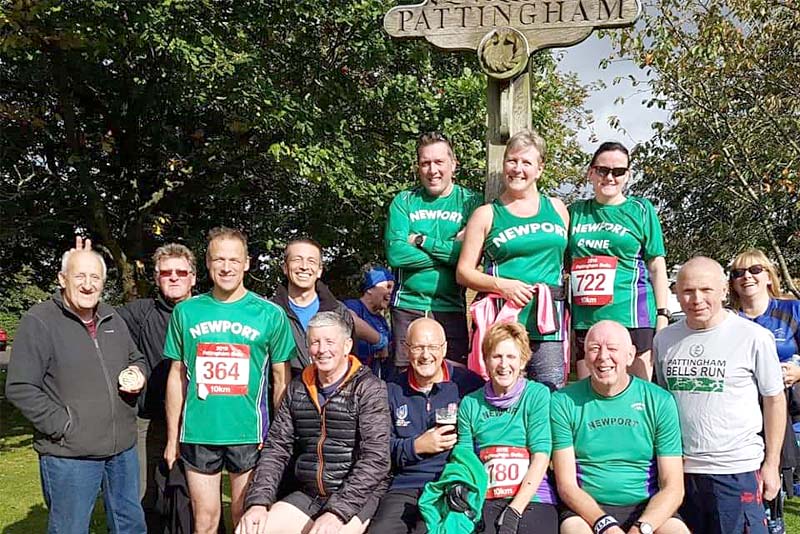 Sunday saw the 30th and final ever running of the Pattingham Bells run, a tough, undulating, off-road race starting and finishing in the village of Pattingham, just over the border in Staffordshire. Named due to the fact that the race was originally set up, in 1990, to raise money to replace the old wooden bell frame in the belfry of St. Chad's church in Pattingham, all finishers received a special brass as a momento.

One of the toughest ultra-marathons in the Midlands is the Long Mynd Hike, which takes place annually in October. The race is 50 miles long, and takes in a large amount of climbing, visiting the summits of some of Shropshire’s highest hills, such as Caer Caradoc, the Lawley, the Long Mynd, the Stiperstones and Ragleth Hill, to name but a few. The race starts at Old Cardington Lane and finishes at Church Stretton School, and has a 24-hour cut-off limit in which the race must be completed.

This year, Newport & District Running Club’s Ian Vann and Ben Roper took on the challenge. They had to battle through strong winds and rain during the night time section, but were rewarded for their hard work when they finished the race together in a time of 16 hours, 58 minutes, well within the cut-off time.

Sunday was a big weekend for distance running in the city of Chester, as it saw the running of their annual full distance and metric marathons, the latter of which which is run over a distance of 26.2km, and is the only race of its type in the UK. The full marathon is a circular route, starting and finishing in the city centre, taking in a number of villages in England and Wales, such as Eccleston, Poulton, Pulford and Aldford. The metric marathon follows the end of marathon route backwards, before turning at the halfway point, and runners from both races share the course from there to the finish. The races normally start and finish on Chester racecourse, but the recent wet weather had caused floods on the infield, forcing a change to the start and end of each race.

Newport & District RC had 3 runners in the main event, the full marathon, and Daniel Miles was the first of them back, taking 456th place overall, out of 4,041 runners, in a time of 3:23:50. Richard Bennett was the next Novaportan back taking 1,018th position in a time of 3:48:15, and Jonathan Pierce, despite carrying an injury, managed to secure 1,683rd spot with a time of 4:14:20. One club member, Neil Fairbrother, was running in the metric marathon, and he ran a time of 2:14:42 to take 130th place in a field of 1,152 runners. There was a moment in the race where Daniel and Neil were running together, despite being in different races, due to the nature of the course, as the full and metric marathon runners headed for home.

Newport & District Running Club had a good turnout for the Shrewsbury Half Marathon on Sunday, with 7 club members helping make up the field of 1,258. The course starts and ends at Shropshire County Showground, taking in the countryside north of Shrewsbury, as well as winding through the historic town centre.